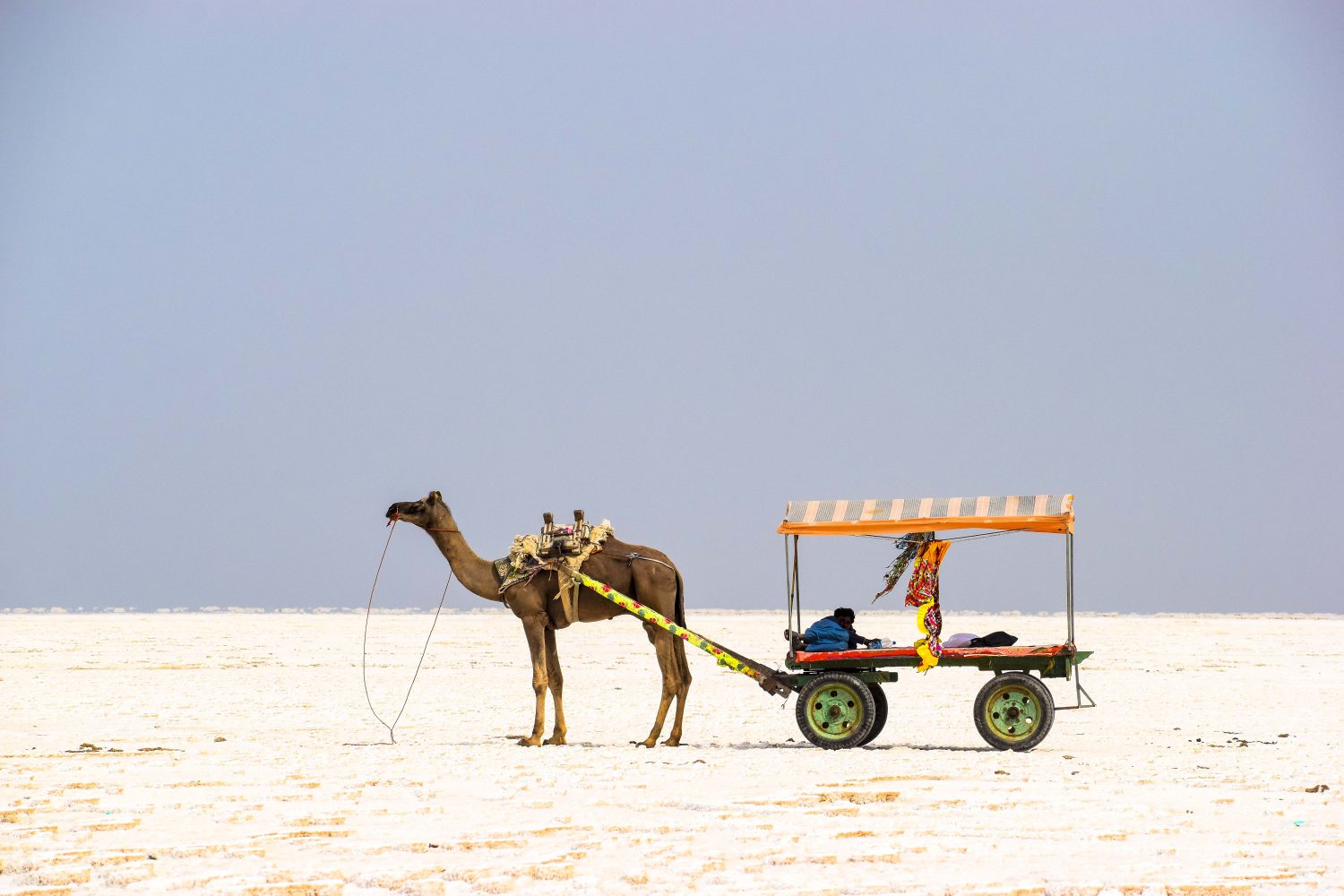 When I first set foot on the empty platform of the railway station in the city of Bhuj, in western India, I had no clue about how incredible Kutch would turn out to be. The purpose for my ten day trip to this tortoise (Kucch-bo) shaped piece of land was to explore the different Indian craft clusters in a dozen villages around Bhuj and document their crafts for research purposes. Least did I know that visiting these villages would open up a plethora of experiences that I had never hoped to find and that this land would endlessly surprise travelers in good ways.

What makes Kutch special is its extremely rich and diversified craft culture. It is believed to be home to ten million weavers, dyers, embroiderers and spinners that came together to create a magical craft tradition that is unparalleled in every sense. To bring in life and color into the otherwise dull terrain, the people of this western district, have developed an excessive tendency to decorate anything and everything they can in vibrant colors. Their clothes, houses, traditions and even animals are so colorful that they overpower the arid dry nature of the sandy surroundings.

However, Kutch remains truly memorable because of its people. The people of Kutch welcome you with a warmth that is hard to find. They will fed you in their own houses when you are hungry; they guide you through the remotest parts of the district so that one can discover an endless number of crafts. A deep dive into the culture, and the artisans living in the villages will talk to you about not just their art, but their folklore, their collective memories and even their childhoods. Their simplicity will touch you and the logic with which they do things will make you re-assess your own understanding of how a highly diversified society can function with least friction.

Here are my some of my favourite stories from the land of a thousand colors:

The Ahirs are a pastoral community of small scale farmers who migrated to Kutch from Sindh. They are also master embroiderers and create exquisite patch work. However, they believe their connection to the soil of Gujarat is rooted in ancient Hindu mythology. They call themselves, the descendants of the Hindu god – ‘Krishna’, and thus identify their clan as yadu-vansh (Yadav-clan). 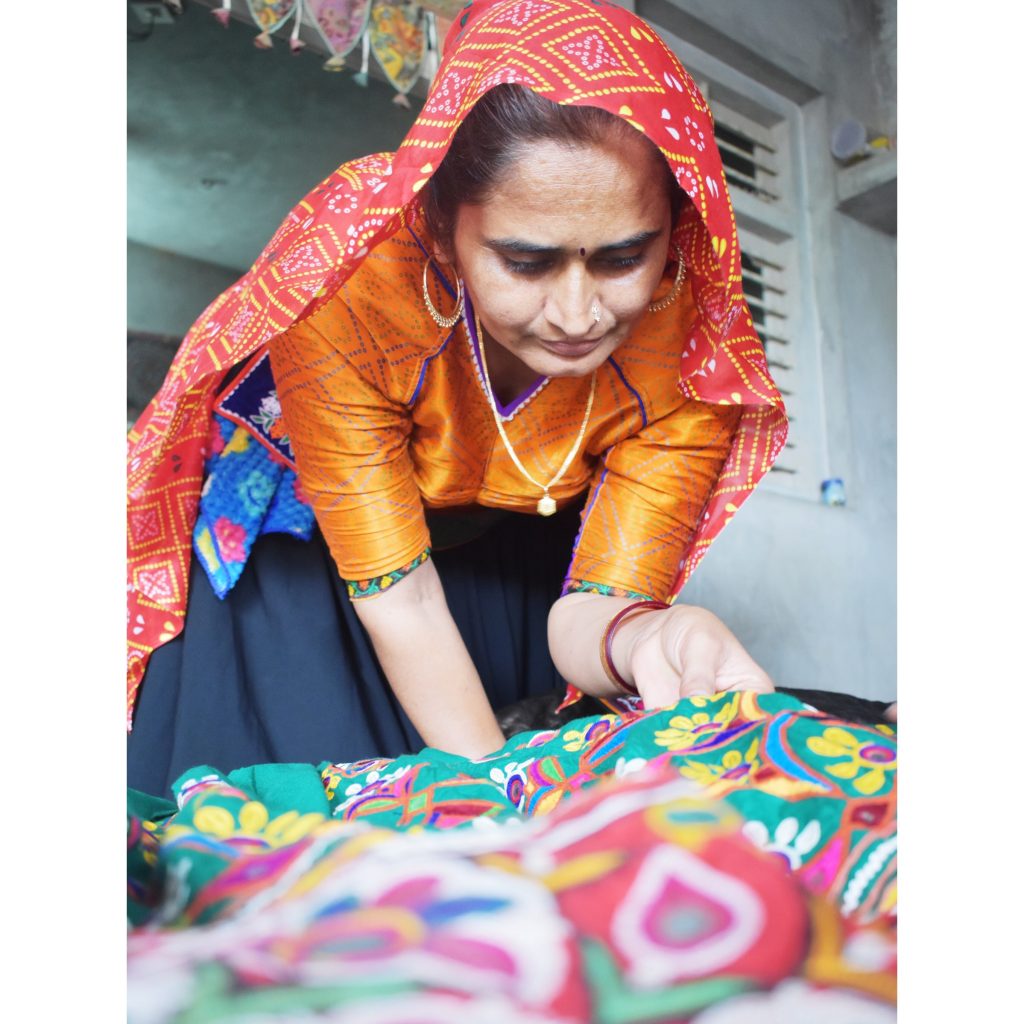 According to their folklore, they were the tribe that Lord Krishna grew up with in Mathura after being rescued from his evil uncle Kans who wanted to kill him as soon as he was born. When Krishna grew up and had to leave Mathura to fulfill his destiny and rule Dwarka, the Ahirs left Mathura too and followed him to Sindh and then settled in Kutch.

THE STORY OF MAI BHAMBHI

Mai Bhambhi was a spiritual leader (Faqiraani) of a community called the Jats that live around the white desert of modern day Kutch. They believe that their origin lies in the holy land of Medina. Spreading through Europe, they moved to Baluchistan and then further fled to Sindh, fighting the army of a king who wanted to marry a girl from their community. The king of Kutch who was warned of their history, decided to divide them into smaller groups and welcomed them to the land.

Mai Bhambhi travelled to various places that the Jats had dispersed to, to talk about religion and spirituality. This heroic lady who is remembered as crossing forests and deserts on a camel alone to preach to her people, taught embroidery to the Jats.

Embroidery thus became of religious significance to this community. They never recycled or handed over embroidered clothes from one generation to other. They instead buried or floated a piece that had been used for a lifetime by somebody. Even today, when some of them have taken the craft up commercially, they charge you for the number of hours (majduri) they put in and do not sell textiles or earn profit on them.

The Meghwar Maru community is a group of Suf embroiderers of Kutch which is a very tedious craft that is practiced using the thread counting method of embroidery. Since people of this tribe are still arranged-married, the bride and the groom often get to see each other only on the day of the wedding, especially when they belong to different villages. They were not allowed to meet or talk before the wedding and hence they used embroidery as a medium of communication. 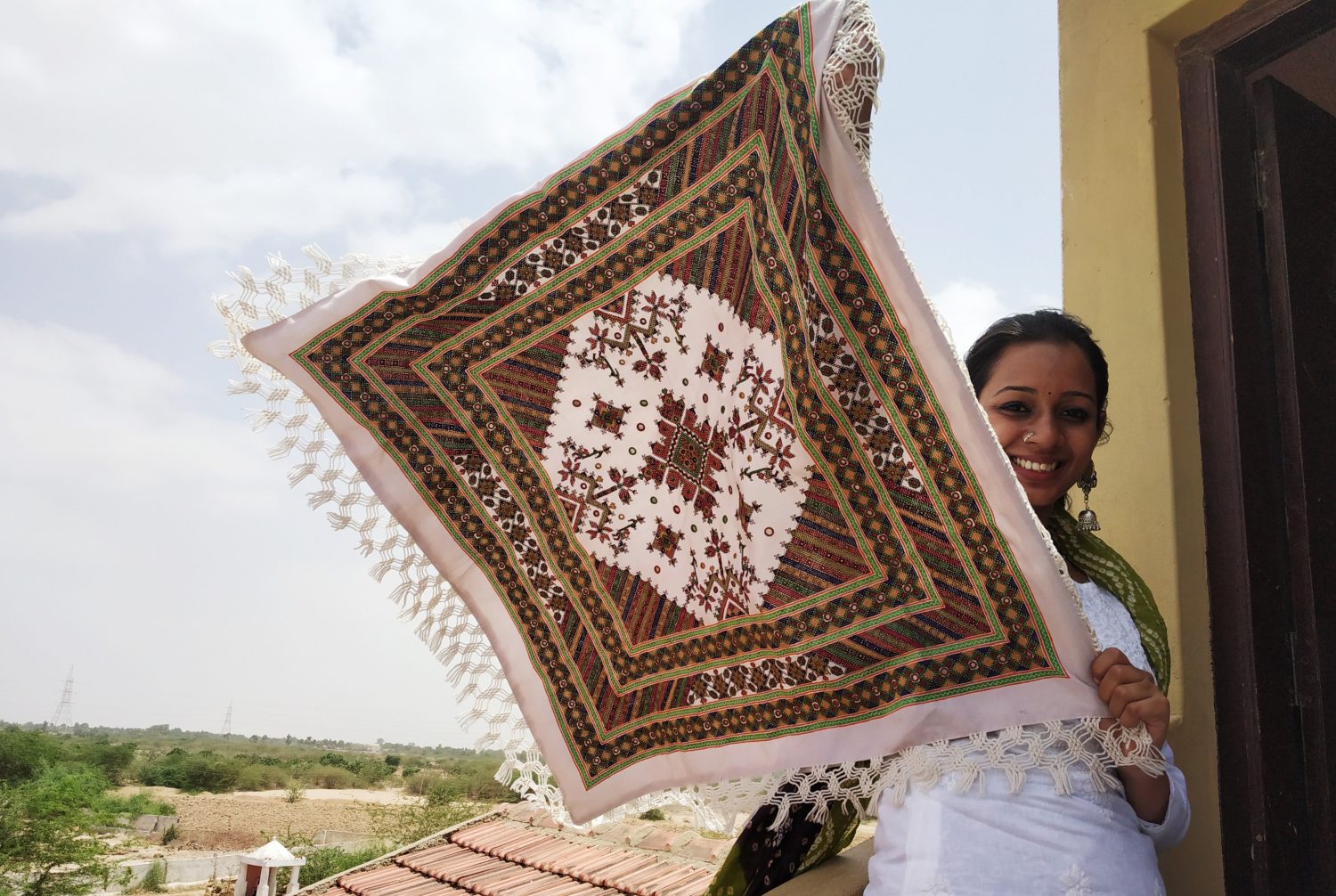 The bride embroidered a scarf called bokani and a belt called vanjani that was sent to the groom’s house before the wedding. On the basis of the motifs created, colors used and the minuteness of the work, qualities like sense of humor and patience were guessed on the other side by both the groom and his family. This fun tradition is still practiced by many brides of the community although the minuteness of the embroidery is believed to be have faded over time.

THE HISTORICAL GUARDS OF THE RANN OF KUTCH

The Mutwas were a group of shepherds that migrated to Kutch from Sindh.  The legend says that when the Mutwas asked the King of Kutch (Desalji) for a piece of land to settle, the king gave them Banni, which is the area closest to what we today know, as the Indo-Pak. It is surrounded by large stretches of sand that go on and on for miles. 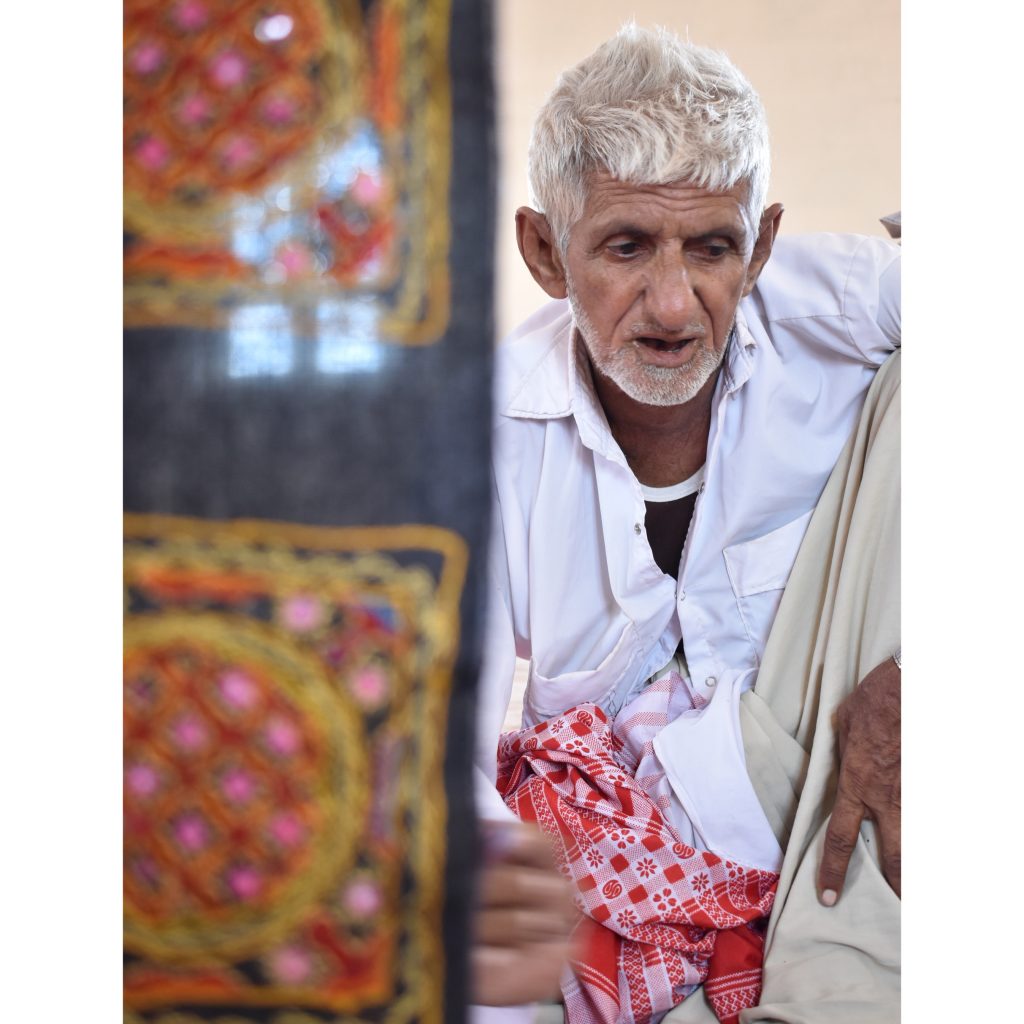 What the king asked for in return was a promise of protecting the land of Kutch from intruders that might want to attack the land from the rann. Stories of Mutwa bravery are still an eminent part of the folklore of this land as they are believed to have fought dacoits across the border for ages. It was the only armed community of the otherwise peaceful and defenceless communities of Kutch.

DEBARIA RABARIS: The community that gave up dowry

The women of the Rabari community are known for creating extremely dense and elaborate embroidery pieces that takes them years to finish. However the purpose of creating these textiles was tied to the problematic practice of child marriage and dowry. 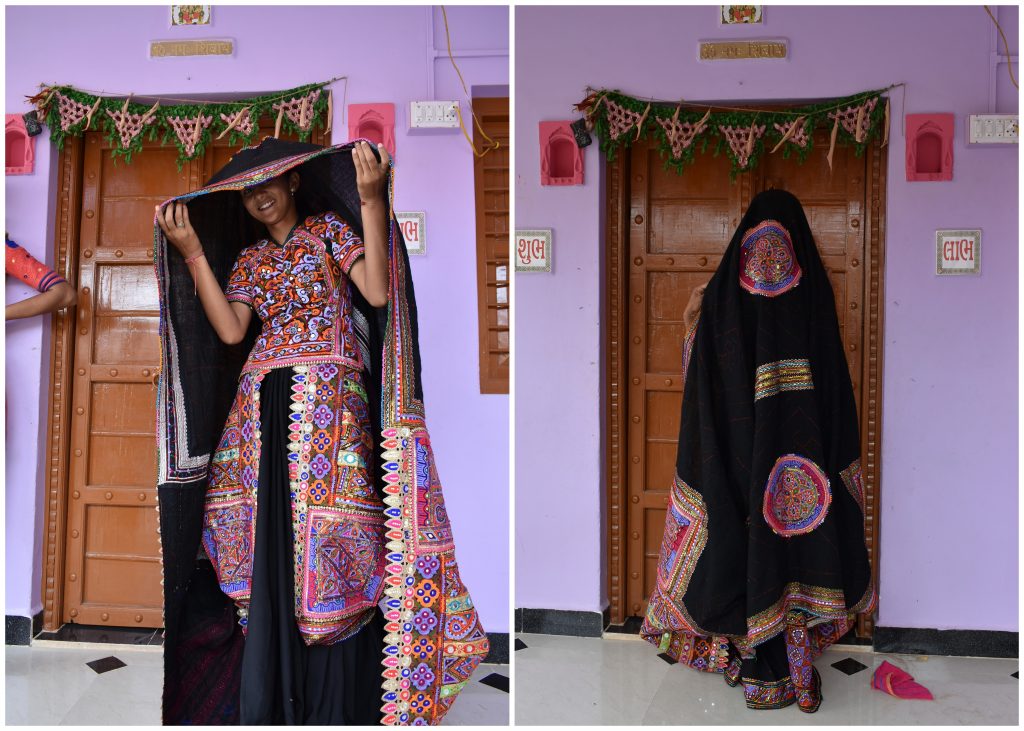 A Rabari woman was only allowed entry into her husband’s house after finishing a certain number of items of embroidered clothing, locally called aanu, for her new husband, his family and even his cattle. This meant their entire teenage and a major part of their young age was spent inside their houses, creating these textiles. The husband was expected to send valuable jewelry in return every year till the wife was ready with her trousseau.

A subset of the Rabari community called the Debariya Rabaris identified this as a wasteful tradition and collectively decided to give up the practice.  They thus pledged to never embroider clothes for themselves again and only practice the embroidery commercially today.