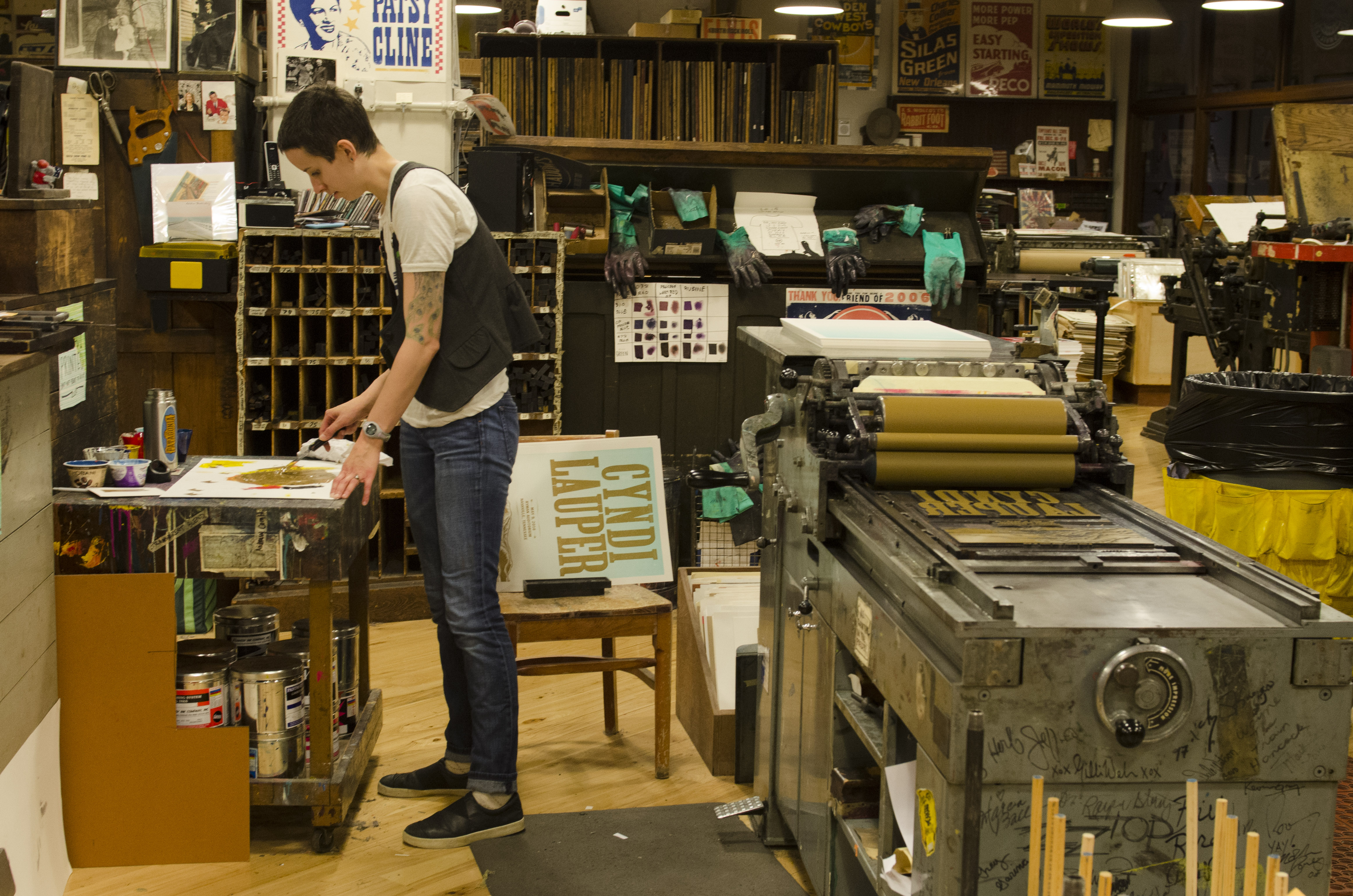 Our reporter on-board, Nikita Sampath went to Nashville for a weekend to celebrate the launch of JetBlue Boston to Nashville, and got us a list of all that you can do in the city over a short trip. This post is for you to get a sense of the Arts and Culture of Nashville, where country music plays in every bar and bathroom.

Started in 1879 by the Hatch brothers Charles and Herbert Hatch, the Hatch Printing Press is the oldest printing press in the US; the print style dating back to 15th century Gutenberg. None of the posters printed for their 600 annual clients are digital. And they don’t add any new type faces.

Each letterpress poster is one, two or three colors only. So one day they do all the maroon in a batch of posters, let them dry, and then do all the yellow on them the next day. Visitors can come in thrice a day to view the space and also make their own poster to take home.

I am not a county music geek, but I am a lover of museums. And this is definitely one worth a visit – and if you’re a country music noob like me, you’ll definitely leave knowing more about it than you did coming in. The Country Music Hall of Fame claims to have the world’s largest collection of country music artifacts. On display are photographs, old music videos, historic musical instruments, clothing worn by country artists and cars they owned.

Look out for: the Taylor Swift bus that includes a karaoke-like booth,  a re-assembled version of Owen Bradley’s office room and a pair of Blue Suede Shoes owned by Carl Perkins.

The Grand Ole Opry started out as a live radio show and continues to date making it the oldest running live music radio show in the US. Get a tour of the backstage where you will find themes dressing rooms – the blue grass room was full of banjo-playing artists when we walked past. The ‘family room’ is a larger backstage room where artists gather and make themselves coffee. A large mural by artist Archie Campbell on one side of the family room reveals a ‘watermark’ – the level the water got to during the 2010 Nashville flood.

Frist Center for the Visual Arts

The Frist Center for the Visual Arts is housed in what used to be the Nashville Post Office. Much remains the same and you can see the floorboards worn at the spots where postmen used to stand and work all day. The museum rotates exhibits, nothing is permanent. Currently they have a very interesting series of photographs from the Soviet. The docent we had on our tour was very knowledgeable of the work on display and explained how photography was used as propaganda in the Stalinist era. On May 27 a sports car exhibition is scheduled to open at the space.

Look up the legend behind this Nashville dish yourself. All I know is that I loved it and that it wasn’t anything I expected. I had the Cobb salad at Part Fowl and chose the ‘medium’ level of spiciness. Choose carefully if you have a weak tongue. Prince’s Hot Chicken Shack is where the dish is said to have its roots at and one will usually have to wait in line to get in.

If you have the time, drive 45 minutes out of the city to the Jack Daniels distillery. We didn’t have the time so we went to Nelson’s Green Brier that is easier to get to.  A guide gives you a background story of the family run business, shows you the distillation plant and the whiskey barrels in storgage. The tour ends with members getting to sample four of their whiskeys, the first of which is a white whiskey that is un-aged.

In the 1850s, Nashville began to be called the ‘Athens of the South.’ Built almost an eighth of an inch close to the original Greek monument, the Nashville Parthenon was originally built as a structure to house an arts fair. The inside houses a statue of Athena – “the tallest indoor statue in the Western Hemisphere” and an art gallery. I personally didn’t find the Athena statue awe inspiring (there was something off about her posture and her knee seemed to be too high) and the art work was sub-par. If you’ve witnessed the real Parthenon yourself, you might be in for major disappointment here. I know I was, but you go and critique it for yourself.

The Hermitage mansion, the home of President Jackson is situated on 1,120-acre grounds that used to be his plantation fields. Over 95% of the original objects and artifacts (furnishings, artwork, textiles, personal items, wallpapers) are held intact from his time. It is rather interesting to see. Also, ask your tour guide to narrate  any ghost stories surrounding the old President’s house.

When talks about booting Jackson from the $20 bill were going on, the administration at the Hermitage lobbied in DC for him to stay on and were told he would, apparently. They found out about Harriett Tubman with the rest of the world. “We were surprised,” said Jason Nelson, VP of Marketing.

About the Author: Nikita Sampath is an award-winning visual journalist who loves food, travel and culture. She has a personal blog, a reporting blog and likes to be followed on Instagram.