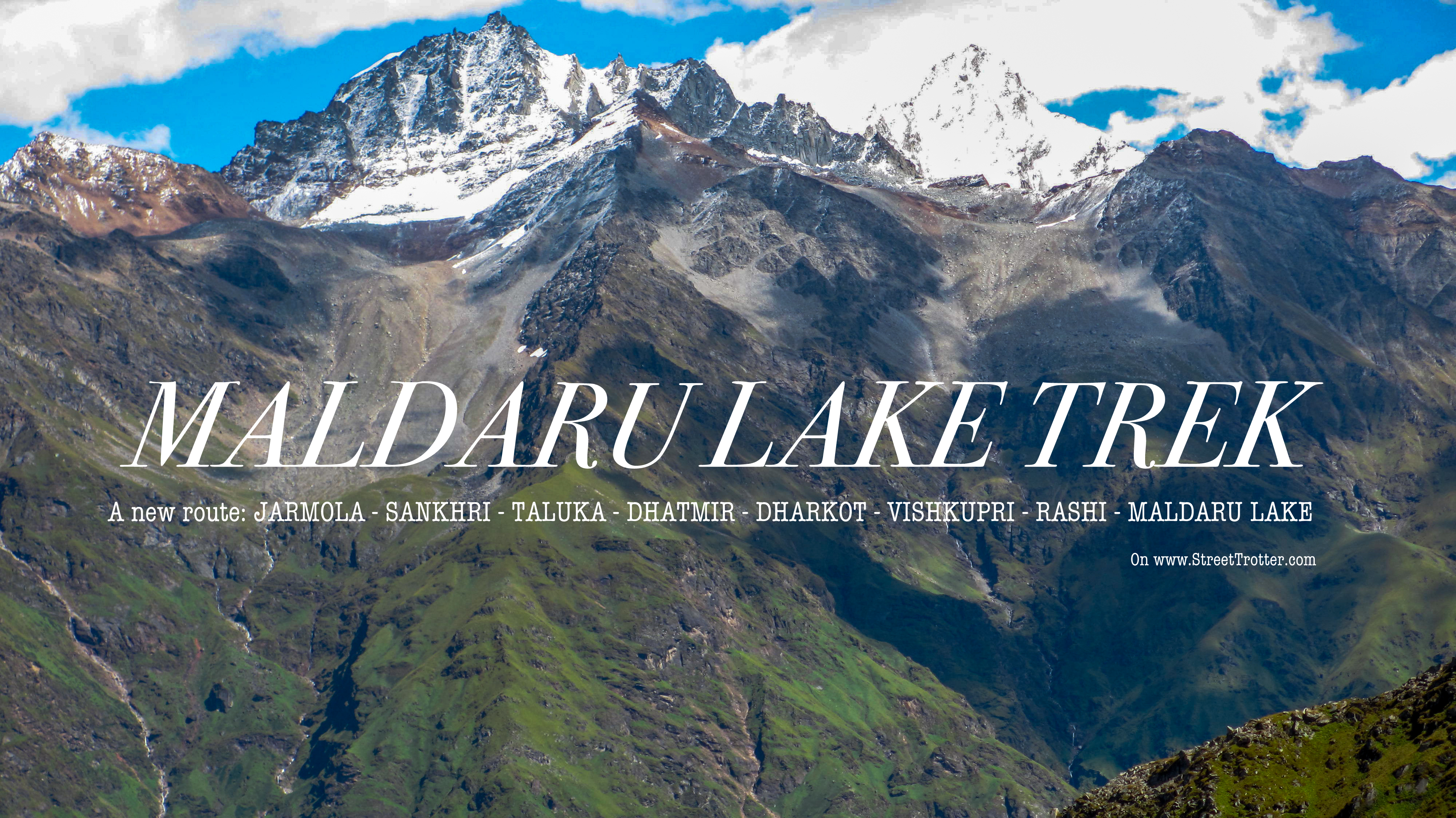 A new trekking route explored to the mythical lake which lies east of Osla village in Har Ki Dun Valley in Western Garhwal.

Lying in bed semi retired with the pressure of the complex city life – had left me very confused and the only answer was to get away. The mountains always beckoned me since I remember things.

The Himalayas embody the grand forces of nature. In these Himalayan highlands: civilization is so remote, towns so distant and serenity so prevalent. Everything is so eternal. Here one is face to face with the universal mystery itself, hiding behind no man-made façade.

I contacted my trekking/climbing buddies of more than 3 decades and they readily agreed in spite of their professional commitments. The trek was finalized on a back of an envelope and my wife assisted me in purchasing ration and packing all trek equipment.

Eventually, early morning, Sep. 15 we loaded our rucksacks and duffle bags on top of our Scorpio and Dinesh Kumar took to the wheels. We travelled over the burning and suffocating plains of North India and arrived late after 14 hours of drive and stayed at Forest Bungalow in Jarmola. We enjoyed a pleasant respite from the heat and the worries of city life. 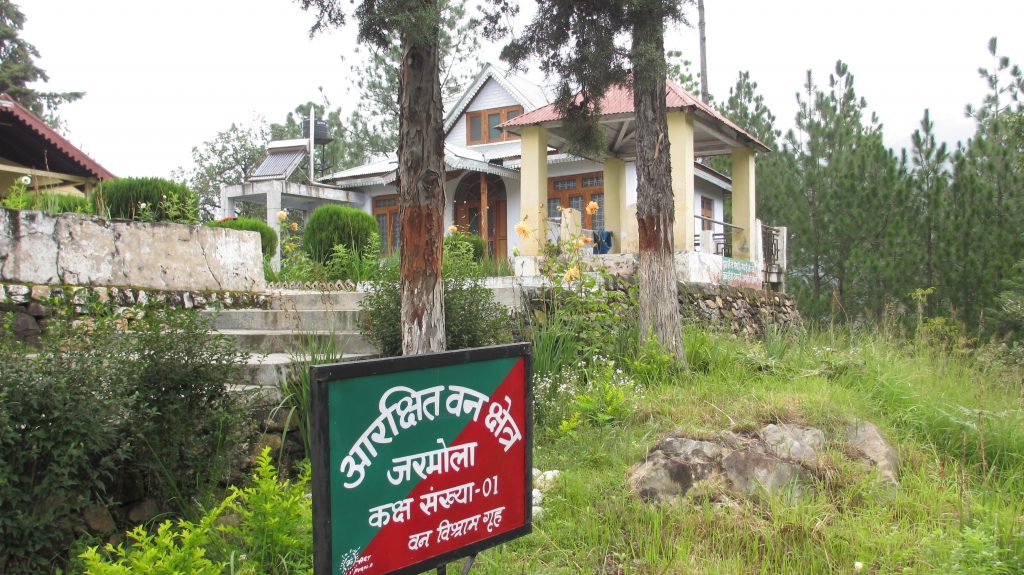 We woke up early morning to the chirping sounds of birds. The bungalow reminded us the bygone era of British Raj and we felt like brown sahibs. The bungalow, beer and the Himalayan air can do amazing things to one’s mind. Perhaps it was our dormant passion for the mountains that burst into a consuming flame.

We passed through attractive hill towns of Mori, Netwar and reached Sankhri – our venue for that night’s stay. Next day we were surrounded by a milling crowd of young porters who would carry our loads for the next 6 days.

Next day it drizzled, a good omen to start our trek. The weather improved and it was beautiful with the blue skies above us. Level walking brought us to Taluka and then we reached the village called Dhatmir.

The night was spent at the home of the ex-wife of Kirpal Singh – our senior most porter. The village looked as if it had frozen in time and nothing had changed since the time of Kaurvas of Mahabarta – as Duryodhana is still worshipped in this part of the world.

Our next day’s trek was to Vishkupri via Dharkot (the last village en route). It is a huge meadow dotted with stately deodars. Pitched our tents for the first time with a late night campfire and slipped into our sleeping bags – we slept like logs.

After walking for 2 days our next camp was Rashi. We walked through breathtaking meadows of Batagor and it was carpeted with marsh marigold, purple gentians, geraniums, and much more. The God who created this land must be beauty-drunk and often finding it impossible not to trample on these flowers. I felt guilty in God’s own garden. 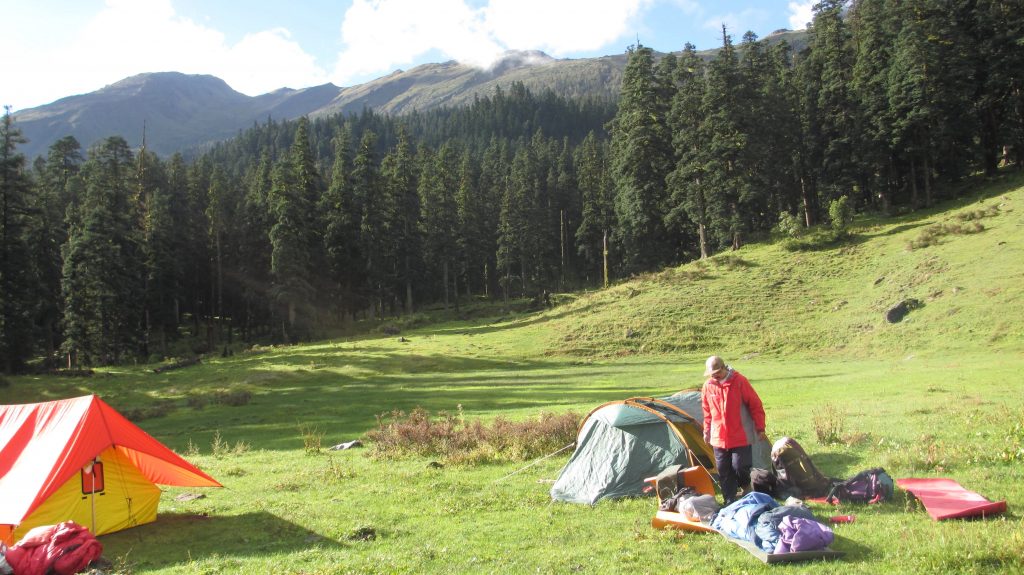 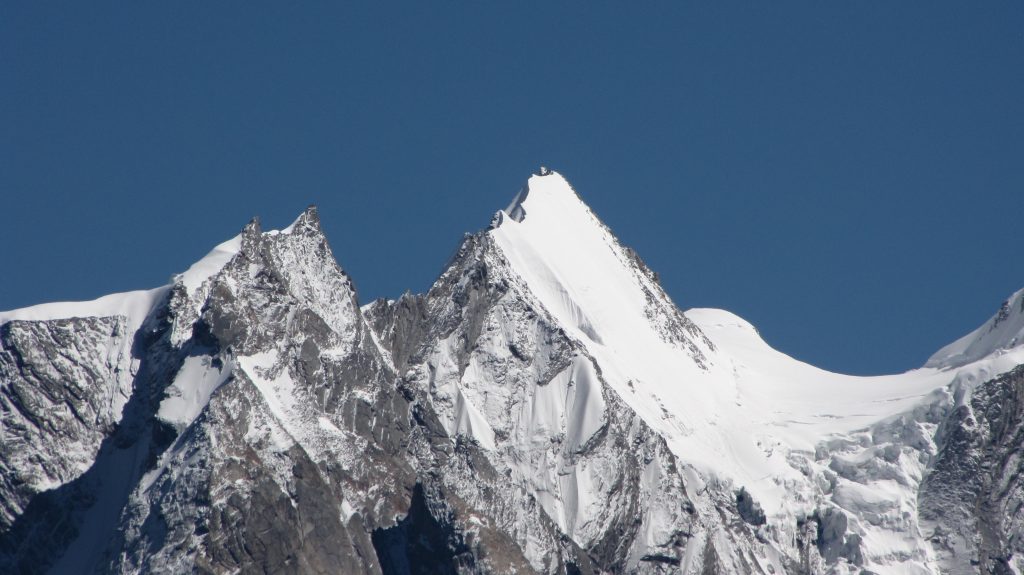 As we closed in on Rashi, we came across a stream. After crossing it we soon found out that there is no regular trail ahead and we were struggling through thick foliage. A long and tiring day brought us to the beautiful camp which was above the tree line. 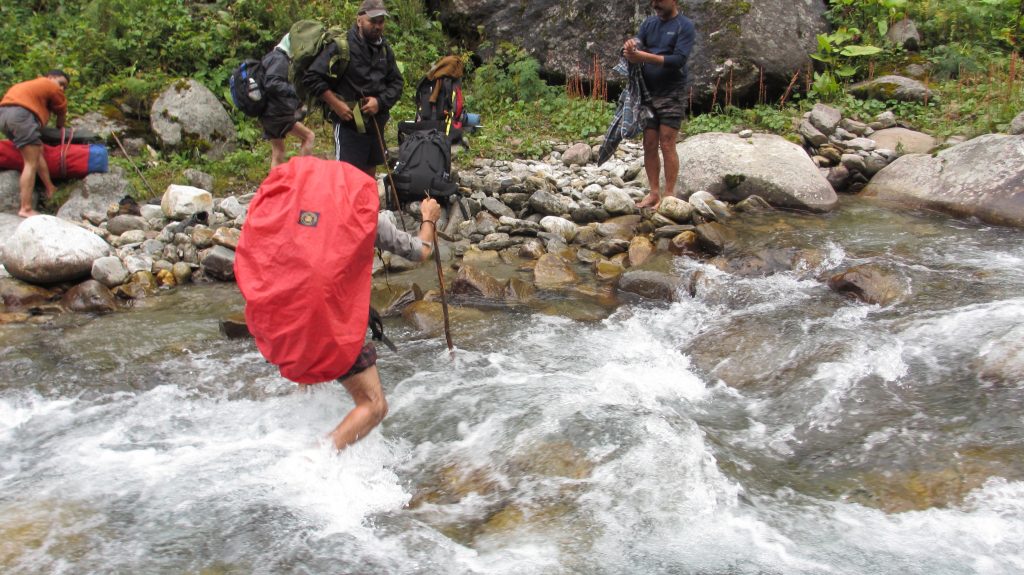 Towards east we could see Manju Kanta Pass, which descends to the Yamunotri temple and towards the south we could see the route we had climbed in the last two days. Memories came flooding in as 15 years back we all had once trekked over a difficult Bali Pass which also descended to the Yumontri temple.

Sitting inside the tent with wet shoes: Bachan Singh and myself were drying our feet, pretending not to look at Bachan’s amputated ten fingers of both feet. The painful memories of almost 30 years ago flashed in my mind which happened while climbing India’s third highest peak Kamet (7,756 meters–25,446 feet). Fleeting moments of sadness surfaced.

Our next camp was the base of Maldaru Lake – for which we had to cross a few ridges and then descend to our camp.

On day five we reached the Lake. It was a tiring walk over the boulders. The steep path of the lake are akin to steep paths of life itself. The path underneath one’s feet moves slowly on crumbled rocks and unknowingly one dislodges granite fragments. The mere sight of the lake was enough to send us in a trance – as salvation have been achieved. 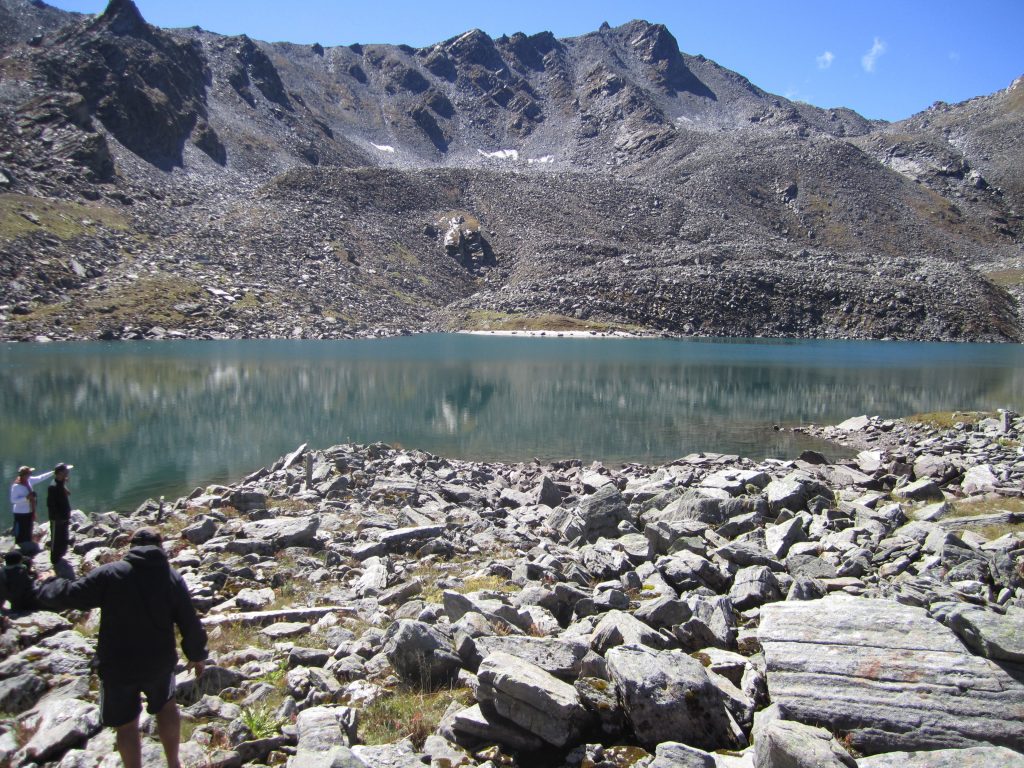 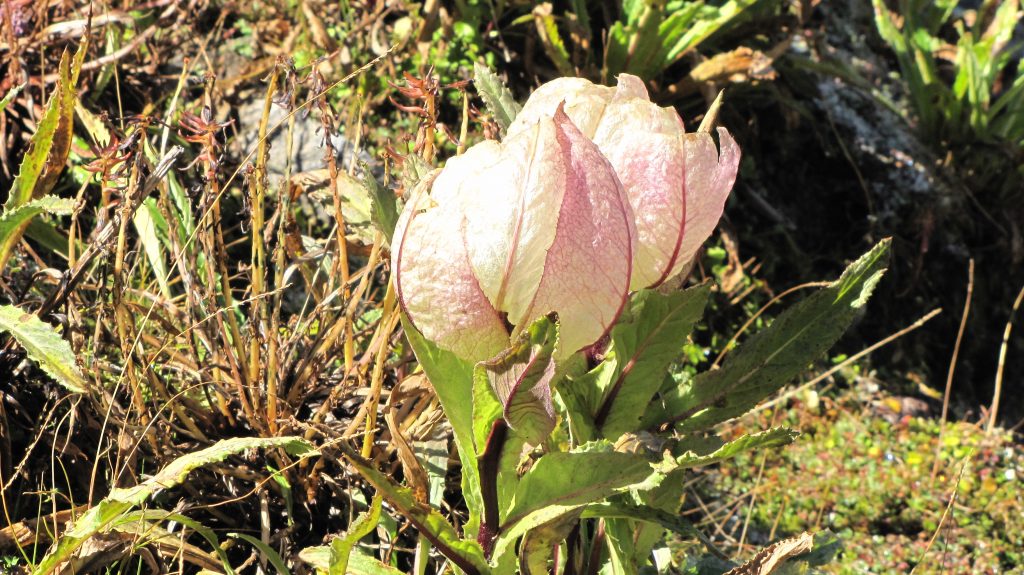 The lake is spread over to 3-4 kms. The area is full of the Bramhakamal flower – which has a mythical association with the creator of the universe. The rare Phenkamal – a high altitude plant – purple petals with a white fading. The stillness of the area was all so overwhelming. I was reminded of the famous phrase by Rudyard Kipling – “Surely the gods live here, this is no place for men.” And I was reminded that it was time to trek back to Seema. 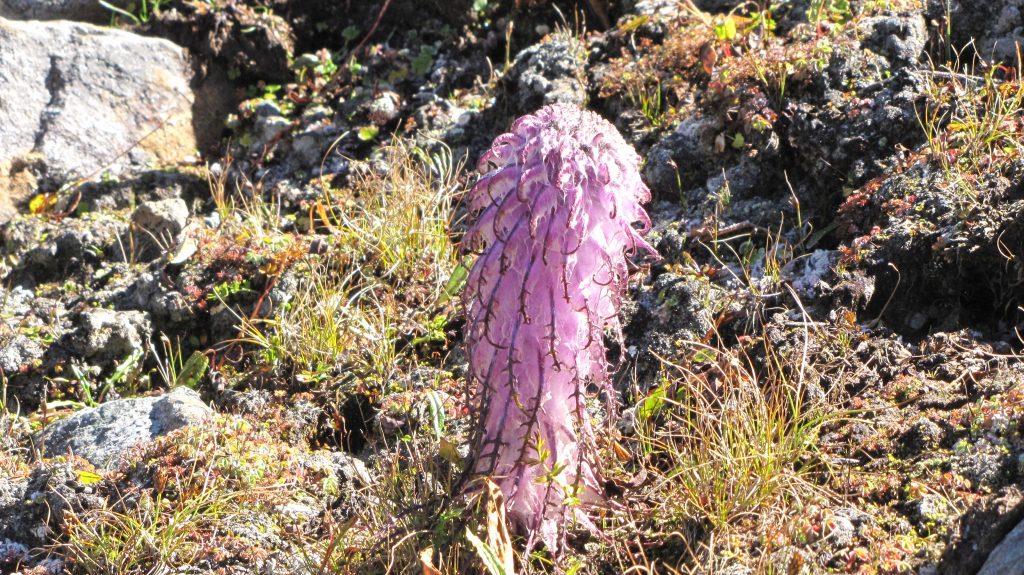 This lake which holds a special significance for villagers of Osla and the porters who were from this village performed a ceremony by floating Bramhakamal flowers on the shimmering waters of the lake.

It was exciting to hear the water flowing through the underground channels which cut through mountains plunging downwards over the rocks near Seema – emerging as a beautiful waterfall.

It was the longest day of the entire trek which took us almost 10 hours. The trek which was a steep and slippery descent through forest. We reached Seema when the sun had already set in and it was dark.

On day 6 (last day) we trekked to Sankhri via Taluka. We reached Taluka during bright daylight. During the day we had ample time to converse amongst ourselves – topics ranging from weather to wine. 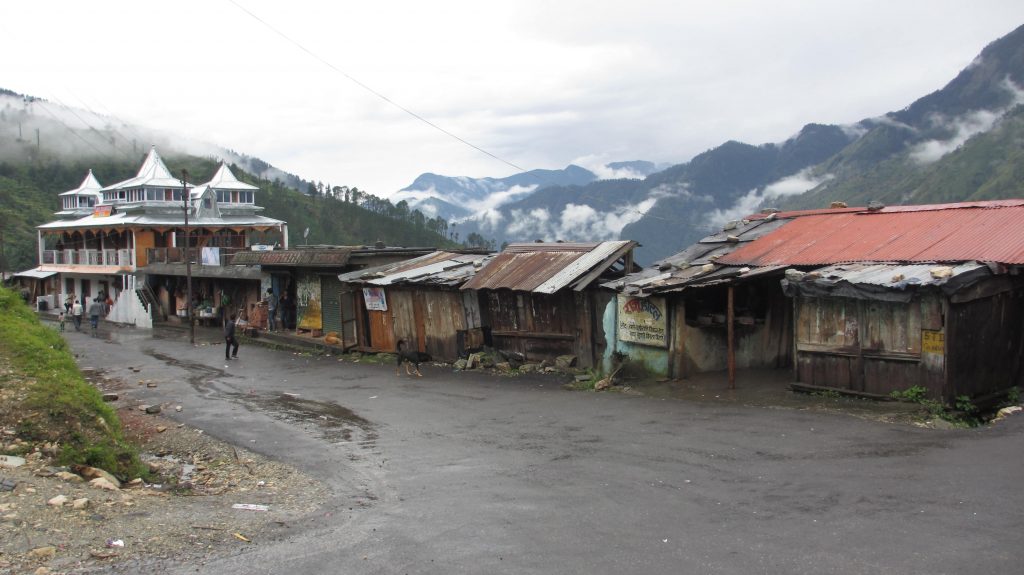 We still had to trek another 14 kms till Sankhri. Yes it was the last lap of our mystical pilgrimage which we thoroughly enjoyed. Tired, hungry and dusty we reached our tourist bungalow and threw our bodies onto the bed to sleep.

Amar Singh our porter boy with moist eyes had extracted a promise from Bachan and myself that one day we would return to his village Gangad. In my thoughts surfaced – shall we meet again? Hats off to these tough Garhwali boys who are strong  and sturdy, who could stand the heat and the cold, carrying huge loads with a smile on their faces in spite of just one major meal a day. 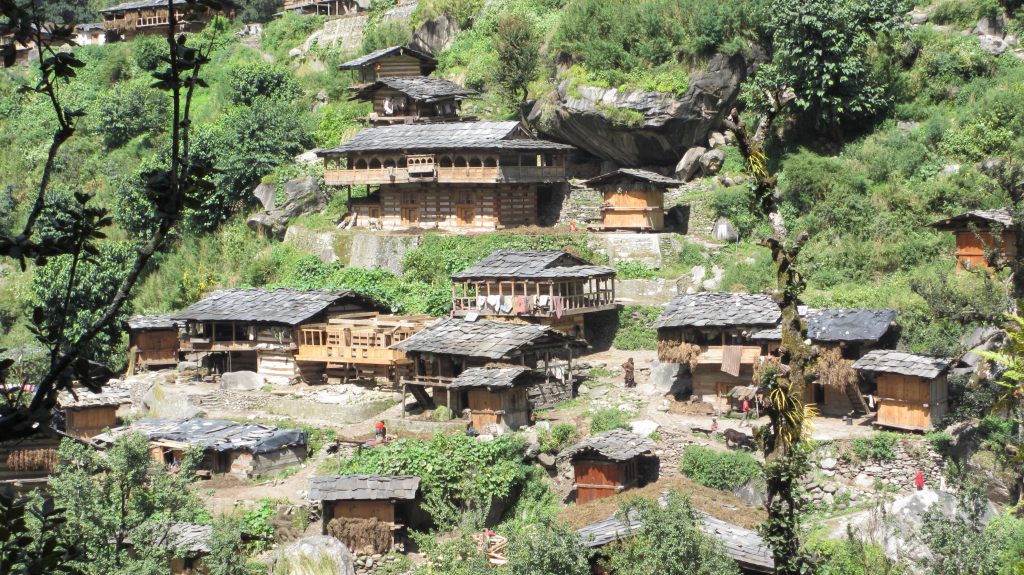 Surely the thought of the mystical lake, the smell of pine, fir and saffron sunsets and the birds wailing to the yellow dawn – my heart will be yearning again for my beloved mountains.

About the author: Narinder Kumar is a well travelled Post Graduate in Tourism from Delhi University. I have an interest in Trekking, Climbing, camel safari, cycling, reading. Have done Basic and Advance courses in climbing from the Himalayan Mountaineering Institute / Darjeeling.

Looking for another trekking route in Garhwal? – Check out our photo journey to the NAGTIBBA TREK. 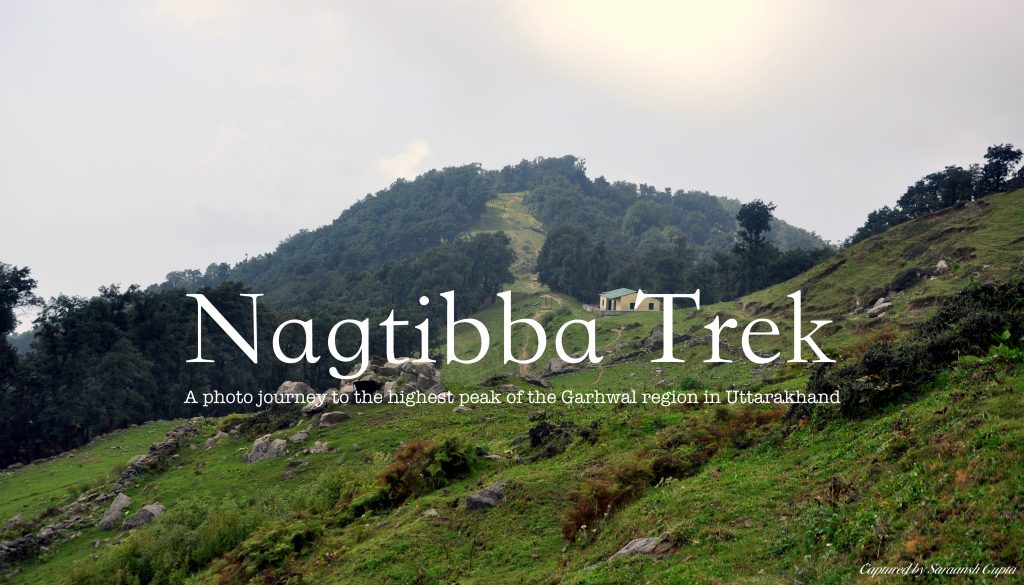 I once lost an opportunity for a job that I though