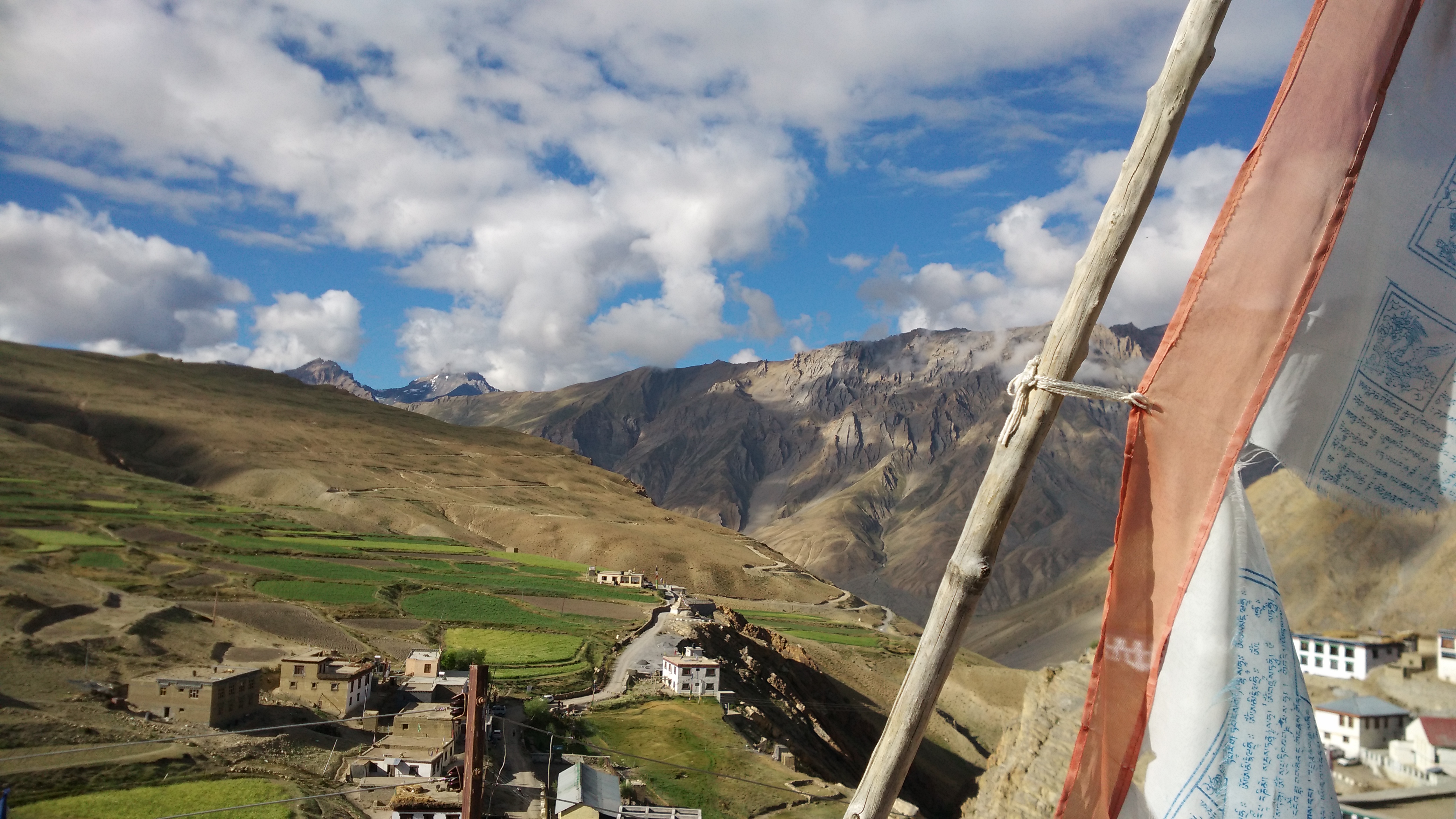 Sita breaks a biscuit into small bits and waits for her son to come around again so she could stuff a piece into his mouth. The three-year-old Tenzin trails around the kitchen on his green plastic cycle. He’s circling his sisters the 14-year-old Dolker and the 16-year-old Padma.

It’s 6.30 in the evening and the sun is almost done crawling behind the grey hills. The last clear rays it sends across the valley is currently streaming in through the window on the left. 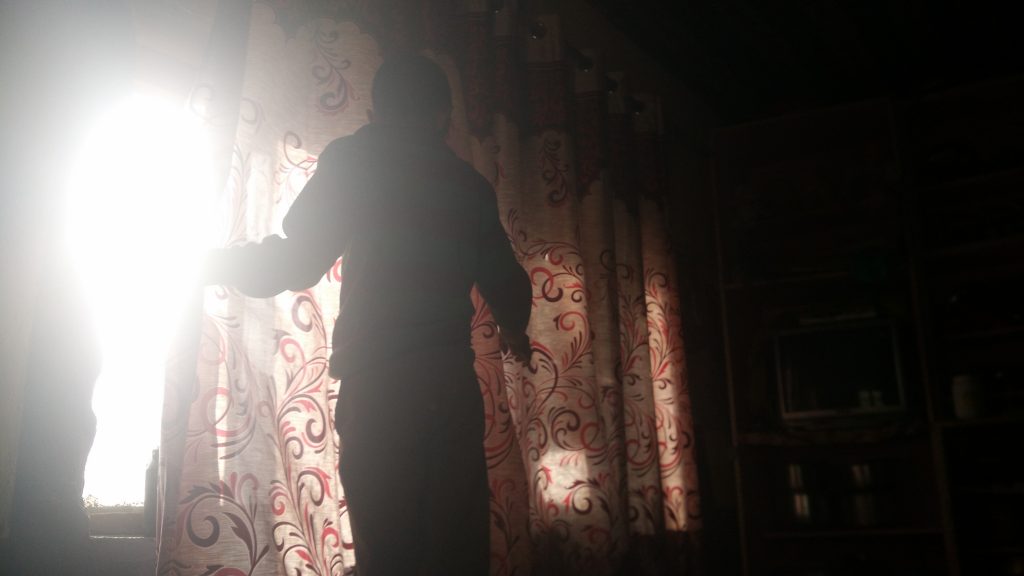 Right opposite where Dolker is standing watching a small curved-screen TV perched on the far left corner of the line of shelves that run the length of the room. Hand on her hip, jaw hanging and nail biting involvement of the girl who I’m incorrectly presuming to be 11 because of her petite frame.

Padma is kneading atta for dinner and listening in to the conversation I’m having with her mother.

Earlier in the evening, when the bus from Kaza pulled in at Khibber (the second highest motorable village in the world nestled in Spiti Valley at about 14,000 ft.), the driver offered to help find me a place to stay for the night. But before he could proceed to tell me about his friend’s very comfortable homestay, I had jumped down the cluttered stairs with my backpack and shamelessly asked the woman with the egg crates and a green plastic cycle if I could stay with her for the night.

Sita, with her meticulously done braid and unforgettable freckles. The woman who pays up in case you run out of change. The one who needs help figuring out how to undo the silent mode on her phone; peering into the small screen through her pink glasses. For her the trust is built. I can stay. 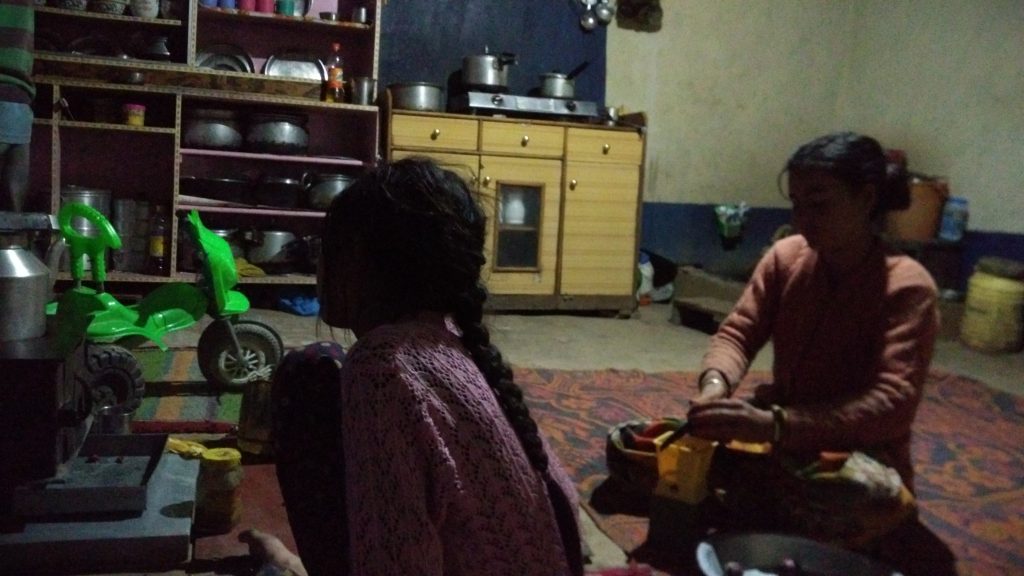 Currently, she is pouring out to me with the details of her life. Sita got married at 18 and after six children is at 37 now. One baby after the other has left her “khokhla” (empty), she says. All because the first boy was born after the fourth daughter. She had even had cysts in her womb and doctors suggested she needed vasectomy but the medicines and the gurus helped cure her. They did jhaar phook and said spells to her stomach and now she is okay.

Rinzin Chachi was also in the bus. She has very fancy and very traditional gold earrings clipped to the top of her ears that hang well till her neck. Her neck is fortified by a luxurious gold choker. Now she sits here in Sita’s Kitchen downing glass after glass of chaang. While I continue to struggle with my first glass. A sip or two makes me feel breathless and all I am up for is spreading out on the cot and taking a nap.

For dinner, Padma (the third eldest girl), Tanzin (the eldest son) and Sita make momos. Atta was kneaded in the evening and kept aside. The aloo was boiled simultaneously and later mixed with onions, salt and local garlic. Fat round chapattis stuffed with boiled aloo and steamed.

The dinner was dry. The atta too hard for my maida momo palette made me feel bloated and breathless all night. Along with the dumpling there’s spicy chutney made of tomatoes, chillies, onions and dhania, stored in a small plastic container, that was passed around from plate to plate.

For breakfast the same menu but with clear soup left over after steaming the momos. And white milk tea. By 8.30 a.m. breakfast is set out. That’s also when the bus that dropped us here, returns to Kaza.

Khibber doesn’t have your modern day toilets. There are dry ones. Yesterday evening, when there was still some light left to the day, I was led to a cemented rectangular structure, about 20 paces away from the house. Two small rooms with metal doors and no latch. A couple of bricks have been removed from the wall behind for ventilation. The floor is littered with dried leftovers from previous users. A community washroom without water, local style. Later I am to find, there is another such loo in close vicinity. Within the house. Used by the family members only. I will have earned my right to use this sometime before my stay is over and wouldn’t have to walk so much with so little oxygen every time I need to relieve myself.

Later at night, when it’s dark, when I say dark I mean it literally. There’s no light outside at the moment. And the number of stars keep increasing infinitely the longer you look at the sky. The household inside is preparing for the night under the light of solar power bulbs.

I open the door and step into the corridor that leads straight to the kitchen. A wooden ladder to the left leads to the roof. Slippers lie scattered beneath it and outside the kitchen door. On the right the curtained entrance to the in-house loo. Two small wooden doors to my left open out to small and compact bedrooms with piles of beddings and blankets and a crowd of wooden beds.

Padma and Dolker stream out of the last door next to the kitchen with piles of blankets. I see Tanzin is collecting pillows. I grab a few chadar too. This one is a warmer room with no windows. Perfect to endure the winters I suppose. But presently, for the June weather the Kitchen works perfectly. The windows have been bolted. The bedding laid out. 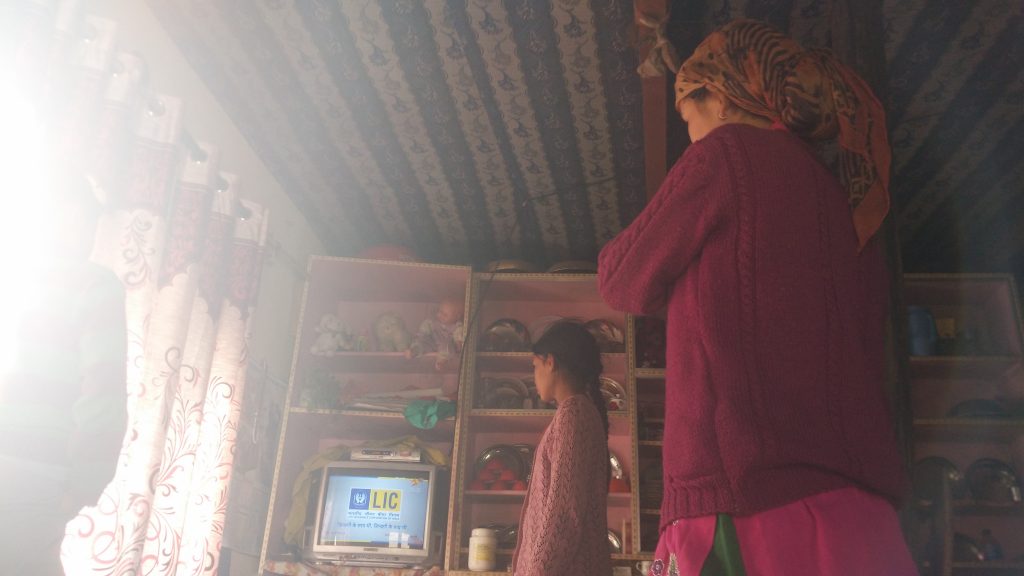 And now the family is turned to the TV gaping at the Monday to Friday TV soap that serves the purpose of entertainment here; Piya Rangrez – of vamps and villains and of a hero who is loved by too many women. Fodder for the night.

About the Author: Neetole Mitra is a travel storyteller at Living Unplanned. She roams the streets of India in search of humour and to celebrate trivial events no one else cares about. You can also find her on Instagram and Twitter